Have you ever heard of hate speech? 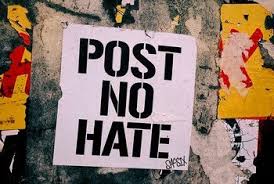 Hate speech is discriminatory behavior that occurs through written, spoken or graphic communication. As the name implies, they are words or images that convey or incite hatred and intolerance towards “certain” people.

In general, hate speech is aimed at people who have different characteristics than the majority of people in a group or community. For example, people with disabilities, people of other nationalities and religions, people with dark or black skin, people from minority ethnic groups (such as Roma people), people from the LGBTQI+ community, fat people (fatphobia), among others.

Hate speech often happens online, especially because people who commit this act of discrimination feel safer in the virtual world, where it is more difficult to be discovered and where they can’t see the results of their actions…

Have you ever been the target of hate speech? Or perhaps you have assisted to situations like this? Or even been the perpetrator…

In Portugal, hate speech is most frequently addressed to LGBTQI+ people, immigrants and Roma people, and takes the form of insults.

This type of behavior, especially when it occurs frequently and in different contexts, can have terrible consequences… Among them, isolation, depression, fear, suicide, low self-esteem, etc. It can also have consequences for the physical integrity of the person, when hate speech includes or culminates in physical violence.

Being a victim of hate speech and exclusion is a difficult experience, especially since human beings need to feel part of a group, to be accepted and appreciated. Thus, people who are victims of this type of behavior feel hurted in their essential human needs and suffer.

On the other hand, participating in the role of observer is not easy, especially since in most cases, observers lack the tools to intervene or fear personal repercussions if they do it.

Do you know what are the causes of hate speech?

Ignorance and fear, prejudices and stereotypes, lack of self-esteem and the desire to feel better by hurting others, the desire for affirmation and power, are some of the causes of hate speech.

Unfortunately, in most cases, people who suffer from this type of discrimination do not think that on the other side there is a fragile, petty and vulnerable person who tries to hide and feel stronger at the expense of others.

However, people do not exist in isolation and, as such, hate speech only makes sense if understood in the macro and structural context of great complexity in which we live. A capitalist and patriarchal culture based on dominance, exploitation, capital, hierarchy, among others, has enormous power to create dynamics such as hate and discrimination.

To solve this problem we have to understand the phenomenon of hate speech from an individual and systemic point of view. On the other hand, in order to work with young people, educating for diversity, it is very important to understand the individual and group dynamics linked to discrimination. In this way it is possible to use them to favor the creation of inclusive groups, promote individual change and peer education.

The RAISE project – “Raising Awareness for Inclusive Societies Expression”, is funded by the Erasmus Plus programme of the European Commission, and the project partners over the next months, will work towards creating instruments and training that will contribute, in a creative way, to change this situation!